Kenya was launched on 18 August 1939 from the yards of Alexander Stephen & Sons, Glasgow, Scotland, by Princess Alice, the Duchess of Gloucester, who always took a keen Interest in her long service in the Royal Navy and after a work up period, was commissioned on 27 September 1940. She took part in the hunt for the Bismarck in May 1941 whilst part of the 2nd Cruiser Squadron, Home Fleet, based at Scapa Flow. On 3 June Kenya and Aurora surprised and sank the German supply tanker Belchen which was supplying U-93 in the Davis Straits. 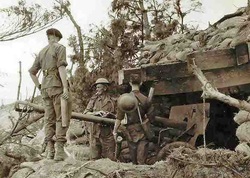 Officers ashore observing the Accuracy of HMS Kenya's 6 inch Gun fire, during the Korean Campaign, in which HMS Kenya was serving under the United Nations Involvement, following the Invasion by North Korea upon South Korea.
In March she bombarded Choda Island in preparation for landing 200 ROK troops there. Unfortunately the troops never showed up.
After further patrols off Inchon her next action came on 11 April when she was ordered to leave Sasebo to search for a communist aircraft that had been shot down. She was called off the operation early to sail to Kure, Japan where Captain Podger took command of the ship on 22 April. In May she took position off Inchon and spent about 10 days there bombarding the land on several occasions. The patrols and bombardments continued throughout the summer – with a trip to Hong Kong that broke the monotony – until 25 August when she left Sasebo, via Hong Kong, for a refit at Singapore. She slipped the refit jetty on 12 November and rearmed before leaving the Far East Station on 17 November. Kenya docked in Malta on 10 December and at Gibraltar three days later before entering the English Channel on 16 December.

HMS Kenya standing by the Liner Champollion. in the Mediterranean during the Liners rescue of Passengers and the Crew. 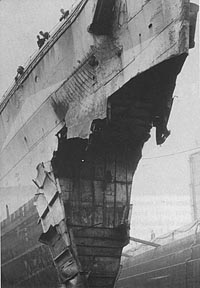 In 1942 the "Kenya" was involved in the Operation Pedestal. the Relief of Malta. during which the Convoy was under constant Air and Sea Attacks during the whole Voyage from the moment they entered the Mediterranean sea, she was Torpedoed by an Italian Submarine, when asked by the Admiral in charge replied torpedoed forward but quite happy, she returned following this episode to Gibraltar, temporary repairs and then Sailed home to U.K for Major repairs in the South Shields Dockyard, following this she was then sent to the Indian Ocean Theatre of War, where she again did Sterling work in that Theatre of operations, upon the Cessation of the War, it was here in South Africa that she had X Gun Turret removed, thus giving her a better Anti-Aircraft protection in having twin 40mm guns fitted. She was involved in much peacetime work, her slim lines gracing the many areas she was sent to, then home to a refit. In 1949, sailing from Chatham to the East Indies, Trincomalee, Ceylon, taking the foreign secretary Aneurin Bevin and the Tooth of Bhudda to Burma on diplomatic involvement. Upon completion of this, and the then sudden invasion by North Korea, she was sent to Korea, under the Banner of the United Nations; it was here that she was instrumental in helping to recover a Mig 15 fighter that had crashed after being shot down, so that U.S Specialists could study this Aircraft and improve the Aircraft they were using at that time in Korea.
Leaving the Korean Campaign she then proceeded to Singapore whereby she had a Major refit, this making her available for further service.  In November 1951, proceeding to Trincomalee in Ceylon, she exchanged Ships Companies,  taking HMS Mauritius home for its major refit. Then she went to Mombasa in February 1952, in order to escort Princess Elizabeth and the Duke of Edinburgh on their Tour of Australia and New Zealand, sadly HM King George died and she had to Assume her role as the Queen, HMS Kenya returned to Ceylon, and resumed her role in the Indian Ocean, doing exercises with the Pakistan and Indian Navies in conjunction with various other RN ships and Aircraft carriers as well as US ships designated to operate alongside of her, until 1952 being transferred into the Mediterranean theatre for a short period of time before Paying off in Portsmouth and being retired into the Reserve Fleet.
She was then given her final Commission in 1959 to visit the West Indies and the Eastern seaboard of the United States.
Following this she was then put up for disposal, sold to BISCO being towed to Faslane in Scotland, it is to be noted that she broke her moorings and tried to wreck herself on the rocky shore.
And they say Ships do not have a Soul.

HMS Kenya was instrumental in being able to rescue Crew Members of a  Downed American Aircraft, during the Korean Campaign, the following Pictures show the Crew being rescued and then being introduced to the Time Honoured tradition of a Tot of Pusser's rum to the Survivors.